Press activity or “hits” can be measured by using a tracking service such as Bacons, Hound Dog, Burrelle’s, and others who scour the press worldwide (via trade pubs, local papers,  national press, international publications, newsletters, radio, online, broadcast, etc.) and send paper, video or electronic clips of product coverage on a regular basis (preferably weekly). You can also get FREE tracking with Google Alerts. Log in to Google, go to the web page, type your search terms and that’s it–takes minutes. Since it is free, you can also set up alerts for your name and anything else you wish.

These clippings and alerts can be reviewed to ensure that your product and company positioning is coming across accurately. They also provide critiques that may help develop a better product (it is important to note the author so the PR team can keep him/her on the radar screen for future submissions, or gracefully and professionally inform them if they were in error).

To determine ROI, we first have to rate the press hits–since they are not of equal value.  We measure and rate the value of a placement plus the quality of the article itself with a formula called the Media Quality Quotient Analysis (MQQ).  The following grid shows how PR value is calculated:

Once numerical values have been assigned to the relative quality of the targeted publications, the results can be measured with a simple formula:

The MQQ helps us determine if our messages are getting out to our audiences, plus it gives us a benchmark for measuring future public relations efforts.

Once we have established the MQQ, we can use the number to estimate ROI. We must first establish an estimated value per hit, which can be compared to the cost of an ad—the “other way” to get our message across. We typically spend $4,000 – $6,000 for a ½ page ad in small trade publications.  If we placed a full-page ad in the general PC publications (PC Magazine, etc.) we would be looking at approximately $30,000 per ad, and global business publications (Fortune Magazine, etc.) would cost over $95,000 per placement.

Since PR has as much value as an ad (although, as quoted previously, PR is “15 times more believable than advertising”), it is reasonable to equate its value (in advertisement savings) to the price for an ad. In our case, for credibility’s sake, we will use $2,500 as the value per hit.  This amount is half the cost of an average ad placed in a small trade publication.

The $2,500 value per hit is also comparable to the high-tech industry average of $150 per MQQ point multiplier.  For example, using a random sample of product announcements, we can tally the initial press and come up with a MQQ.

This represents an estimated dollar value (based on the MQQ) that we received for press hits in our example.  We could have increased our score significantly if all the press hits were in our preferred publications.  Regardless, the MQQ demonstrates the estimated ROI for the press activity.  We expect to tally the MQQ on a quarterly basis to evaluate the ongoing effectiveness of our efforts.

There are also intangible benefits to the PR efforts that are not accounted for by the MQQ formula, such as increased support by alliances that may have since decided to endorse your product.

Following is a sample goal for PR activity during the year along with the associated return:

It is a pity to get positive press and then not use it. we can order reprints of press reviews and create a testimonial booklet for our sales force and resellers. We can also include press quotes within our collateral, our packaging, and on our Web page. We can get copies of our press by subscribing to clipping services.

Typically, the PR team would review weekly press clippings, photocopy the best ones and circulate them to the executive staff, to sales, engineering, etc. It is also nice to post the best articles on a central bulletin board so the entire company can see and benefit from the feedback. It is also important to circulate any negative press to customer service and sales, along with internal messaging and rebuttals so we can properly deal with it when questioned by customers or prospects.

Chanimal was featured in a PR blog several years ago as a BAD example of what not to do. The writer said we should never try to calculate ROI for PR using advertising ratios, etc. In fact, all he did was complain. He suggested that winning an award for cereal wasn’t going to do much to increase sales. He used a few other examples and from his perspective, he was 100% correct! However, he was only using well branded, respected consumer goods as examples.

At one time, I might have felt the same way. However, in high-tech, PR can make a massive difference. One of the reasons is because of the “Technology Adoption Cycle.”

With new technologies there are a) Innovators, b) Early Adopters, c) Early Majority, d) Late Majority and e) Laggards. The innovators are the hobbyist. They are willing to take risks and like being the ones to test out new products. The early adopter doesn’t love the tech so much as the value. The early majority are pragmatic and more cautious–they want validation before they buy (either from formal reviews, recommendations from friends, etc.) I could continue with the others–but there is no need… since the early majority are influenced by “referencing”–which is PR!

There is also a Chasm that exists between the innovators/early adopter and the early majority. I liken this to the amount of energy it takes from the time you apply the heat, to the time the water boils–energy goes in, but it takes awhile before you get your first bubble. It is easy to keep it boiling afterward, but there is a LOT of energy to get it started.

I met Jeffrey Moore at a conference we were both speaking at and congratulated him on converting a marketing 101 concept into a multi-million dollar consulting firm–mainly because he recognized this Chasm (read the industry classic, “Crossing the Chasm”). 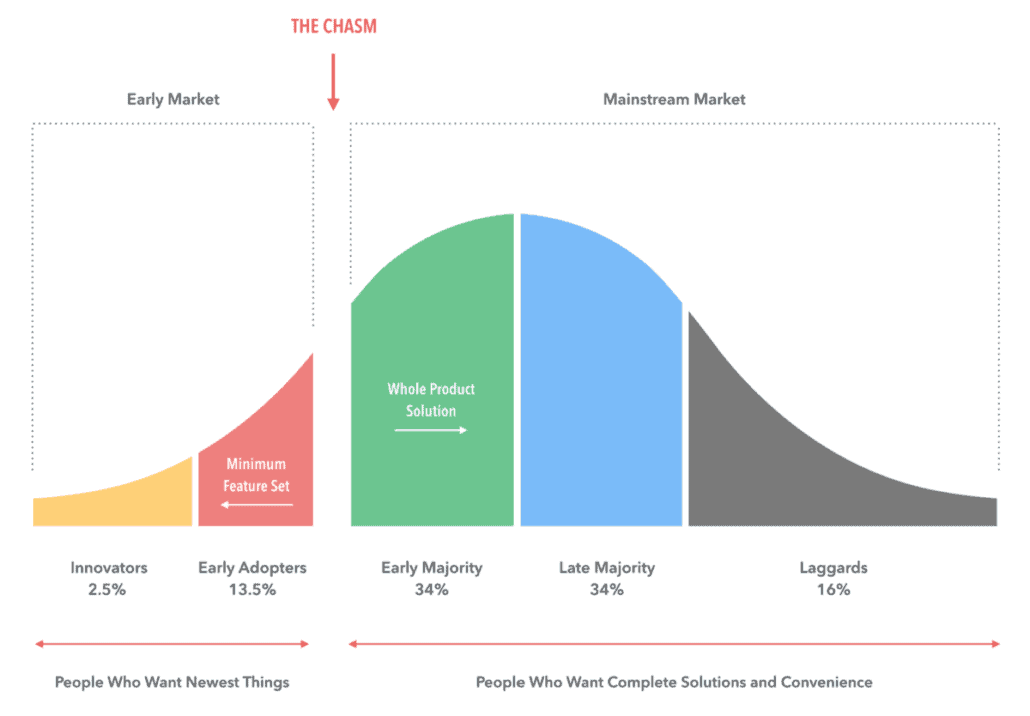 The critic of this ROI approach was using Early Majority and Late Majority models–where referencing is not as critical, but he didn’t understand the massive impact that PR with reviews, awards, etc. could have. In fact, while the VP of Marketing at Goldmine Software (with over 1 million users), our best ads would produce a 13x return (spent $10,000, would get $130,000 in trackable sales), but winning PC Magazine Editor’s Choice (won 8 consecutive years in a row) was worth over $1 million in sales each time it won.

The key is creating “impressions.” If someone needs to hear about, see, read, and watch TV about a product 7 times before they act–then your job is to get as many of those impressions for as cheap as you can–and PR has no placement cost, yet produces more leads than some of your best ads. Hence the reasoning that you can replace one “impression” for another and can substitute the cost for that source with another–hence the value per impression (advertising, PR, SEO – if you are able to use one you don’t have to use the other).