In this section, we focus on channel PRM software and a Reseller Partner Portal that will help marketers, sales and channels.  Topics include marketing automation, CRM implementation (not just selection) and info about a PRM. It will also include partner portals, e-mail, webcasts, and tracking. The comments in this section are VERY high-level but give a general overview.

This is software to help you manage your reseller channel. Following are some of the companies that I am aware of (see the Forrester report at the bottom for a much more detailed analysis):

Channeltivity. I’ve talked with their team for years since 2007.  Channeltivity has a complete system to manage partner content, MDF/Co-op, leads, reseller locator, and deal registration. It is one of the more affordable PRM systems–good for the new startup channel. It uses a portal-based approach and has been used by several Chanimal clients. I’ve used a sandbox it for several years and had it configured according to how I prefer for the partners.

It was very easy to set up and I could do everything I needed for a new program–with plenty of room for growth. The pricing used to be about $6k per year–but they have since increased it considerably (it may be out of range for many new start-ups).

GetPartnered.  I haven’t seen it and it appears new (as of 2016). A SaaS app that does deal reg, lead distribution, pricing and quotes, on-boarding and collaboration. It has a core version and an advanced that integrates with Salesforce, Slack, plus has e-signature, etc. I don’t see it come up in the reviews very often.

Impartner PRM. I had a call with their team and saw much of their application. It is “partner portal centric” which I like. I did notice a price of $2,000 per month (for up to 100 partners), plus more for additional modules, so it is not for the typical startup channel.  I saw the main modules–well integrated, a central content management system. I like the modular approach. Has a 30 day start-up time. I want to see another more in-depth demo but what I saw was VERY impressive.

They continue to make headway and have gotten a lot of traction. Of all the ones I’ve seen, it works the way I would run my channels–but at a price (not hard to exceed $30k or more per year with even the basic modules).

Relayware / Ziftsolutions. Claims to be the #1 Partnering Automation platform. I haven’t seen the latest version–which isn’t a problem since they have merged with Ziftsolutions. BTW – fun video.

Computer Market Research. The name doesn’t sound like software, but they have a very robust PRM. I’ve seen it and it has a LOT of features. It covers channel inventory, deal reg, co-op/MDF management, Spiff Management (hadn’t seen that before), bi-directional Salesforce integration, rebate management and much more. The interface looked complex, but they may have smoothed it out since the last time I saw it (seemed more like an engineering, rather than a channel marketing interface).  I usually prefer something that starts with the portal site and adds features, but this sure has a lot of tools.

ChannelXperts. This company caught my attention as one of the first who offered a free PRM light application–which would have been perfect for all the startups I help–or so I thought. They have a lot of brand confusion since they use the name Channel Crowd, ChannelXperts, ChannelOS, and ChannelPRM.

I first met with their US-based GM, but he missed his appointment twice and then never followed up. I was able to see a demo (May 8, 2019), but it was fairly disorganized. I also signed up for a trial of their free version, but I could not figure out the confusing interface (even after the demo). It is not like a normal partner portal and it didn’t seem ready for prime time and was not intuitive.

Salesforce.com. They have a PRM module but I have never seen it. I have requested a demo four different times from their form, but they never, ever got back to me for the demo (I’ve never been impressed with their sales model (primarily use affiliates, as though they are good at sales–but they are notoriously pathetic with their sales follow-up). It took almost four weeks, multiple calls, and a message to the CEO and the press before I could get anyone to return a call for their CRM and channel details for the industry certification (finally got a Sr. VP on the phone). So far as their PRM, I only know it works well with Salesforce, but that they charge per partner, so it can be very expensive as you build out your partner program. It is almost like they hide their information (hardly anything on their website–like step-child product).

I have a VERY detailed comparative analysis comparing Channeltivity, Salesforce Cloud PRM, Zinfi PRM, Zift, Impartner, Allbound, and Tie Kinetix and a partner portal. Unfortunately, it is about 90% complete–but alas the intern that was helping me returned to school. One of the vendors was happy to meet with me to help fill in the blanks but insisted on an NDA–which defeats the purpose since I wanted to see the product so I could specifically talk about it in my channel training, certification program and industry blog.

One way to determine the ROI for PRM software is to consider how many more partners you can manage with it, versus without it. When you feel you have to hire another person since the existing person can’t scale doing it manually–that’s the time to consider it. When you consider the cost of the channel manager ($80k at least (avg is $137k) vs the annual cost of the software (even if $50k), then you save more with it than without.

Another category of software is a partner portal. It is not a dedicated PRM per se (although it is only missing the built-in automation and analytics to run a large partner program (too complex and not needed for smaller programs), it can have most of the main features–enough to set up a partner program. Depending on the platform, it can integrate with most popular CRMs–which can do the analytics of many of the PRMs (although it is not pre-configured so you have to set it up yourself). 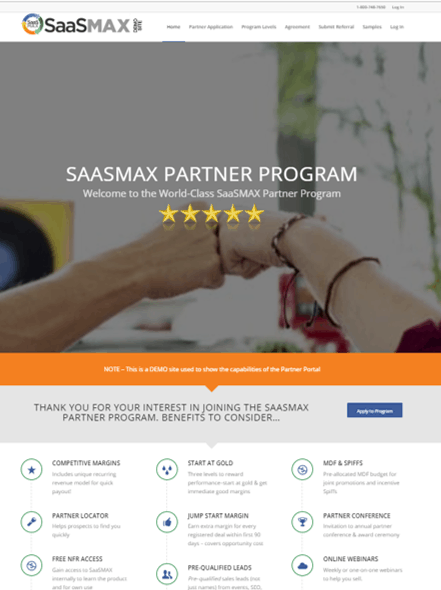 channel. Then, once they proved out the model and start making revenue from their partners, they can justify the cost for additional modules and a fully dedicated PRM system.

Channeltivity was the closest, but later they increased their price beyond the startup range so the start-ups couldn’t afford them.

I would often make the case that some of the companies I picked up as startups grew very fast (Creative Labs (when they had 3 people), Citrix with only 27 people (grew to billions in revenue), Netscape (enough said), BigCommerce (with 2 people (they now have hundreds and their last round of funding was over $120 million). All of these companies needed something at the early stage–so the vendor who could get them hooked initially had an inside track.

Unfortunately, there doesn’t seem to be enough money in the early channels–or more vendors would cover the space.

You MUST have a reseller portal

In my case, I cannot consult with a company and launch a partner program without at least having a reseller portal to contain the policies, the forms to manage new partner registration, deal reg, MDF request, etc. So, I was forced to create one–first in HTML, and then it was moved into WordPress.

Now, after over five years and 48 releases, it has grown beyond a simple portal. It has an LMS for certification, a built-in forum, reseller locator, levels, auto-notify forms, and access to thousands of WordPress developers and over 40,000 plug-ins (including integration with every major CRM). It has been proven with thousands of resellers and the response is always great.

It is beyond the basics and matches the intermediate to advanced features of many PRMs–although the analytics, marketing automation, and deal flow processes would occur within your marketing automation and CRM (which is 100% fine when companies already have the capability in their existing systems–there is no reason to duplicate the capabilities and pay twice (this is the MAIN difference between the portal and a dedicated PRM)).

SaaSMAX / Chanimal Partner Portal. The portal has since been commercialized and can be purchased through SaaSMAX, but is also available as part of the Micro Consulting program (either through SaaSMAX or Chanimal)–which provides EVERYTHING needed to set up a new partner program (or expand an existing one) and it is all included. The biggest plus–it is pre-populated with the industry best-practice content (an agreement, levels, policies, templates and more).

It is perfect for building out a new channel program and can handle hundreds to thousands of partners. It can also integrate with most CRMs in about 20 minutes. When you start having a lot of MDF, promotions and deal registrations is when you will need more analytics and automation. You can either create it, or it is time to consider a PRM (although many vendors will still miss the simplicity of the portal-based approach).

You can see the sample portal at http://saasmaxpartnerportals.com (make sure to click on the Samples menu to see various looks and feels within several live sites).

You can also view a video (below) of the webinar when I explain what to look for and gives a peek at the portal itself. The inside of the portal starts at 35:35.

Software that will help you to help your partners to generate more demand (leads ):

SturcturedWeb. Their channel software helps you provide repeatable marketing programs to your channel partners at the same time. Includes over 15 marketing tools (direct mail, email marketing, content syndication, social marketing, etc.).  I met with their president and a few others to learn more.  It had a lot of features–but they didn’t give me a demo (said they would follow up, but it never happened). Cost around $2,000/month for the system.

Vartopia. Consolidates your complex deal registration deals from multiple vendors. Some deals involve multiple vendors. A VAR would have to submit the same deal multiple times (often to as many as 10 vendors at once) for a complex integration. Instead, the partner only submits once and Vartopia does the rest and allows a single dashboard to review the status. Free to VARs, paid for by vendors.

Say hi to Mike (one of the co-founders) for me–I hired his fiance as a MarCom Mgr while I was with Motorola and consulted with him and his educational start-up when he was just completing his MBA years ago.

CRM software is the primary software for salespeople. I typically break down the competitors into seven main categories divided by either size, platform or focus (the primary user):

It has grown robust and can integrate well. Many PRMs contain duplicate features that aren’t always needed if you can personalize your CRM.

I happen to use Goldmine–but that’s because I have used it since 1990 (ver 1.0), it still works fantastic (prefer the older version to the latest (slower, messed up the interface)), I have thousands of vendors in my history. But then I was also their first VP of Marketing (back when they had a million users). I have managed tens of thousands of partners very well with Goldmine.

We do training at our facilities, from 3rd party facilities (Horizon’s, etc.), and sometimes on-site (with the big partners like CDW, at the resellers own national meetings, etc.), but nowadays, we can create all our training online–using a learning management system (LMS). There are several open-source systems, and some used by universities–but I prefer the ones made for training business partners.

I typically use two WordPress systems: LearnDash (used for the Chanimal Certification Program, more robust and more all-inclusive) and LearnPress (used inside the Chanimal / SaaSMAX portal, easy to use, uses a modular approach).